Many years ago, I purchased a Pilot Vanishing Point Fountain Pen. Pilot Pen Co. started making these pens in 1964, but I am pretty sure I did not buy one all the way back then. Its age is important, because when I contacted Pilot Pen to ask if the case could be repaired, they said the pen was so old, no more parts were available. Pilot Pen would have to replace the body at their cost.

The only reason the case needed repairing is probably just through many years of normal use, the pen’s body would unscrew itself, which was sometimes awkward. 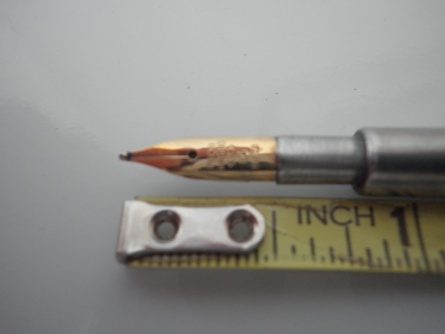 Well, I finally decided to send the pen in for repair. I insured the package at the post office and received a tracking number, and gave the USPS site my cell phone, so I rest assured that the pen was delivered to the right place.

Although my pen is by no means one of the people or companions who lives or has lived with us, the experience of sending my fountain pen off was like sending a loved one off to Summer camp. But at least, I got texts.

The pen will soon be on its way back and will look like this:

And I am pretty sure, I’ll receive more texts telling me about its journey.

By the way, I have found over the years that Pilot Pen Company responds to their customers, and regardless of the cost; they back up their products;  and they are nice to deal with.